Since discovering all of the rust in the frame of my bus, I am faced with the decision of where to go from here. Do I just cut my losses with this bus and start again to try to find a less rusty one? Or do I stick with the one I have and make the best of it? It’s not an easy decision, especially if like me, you have a very limited budget.

I decided that before I could decide, I needed to get a really clear idea about the condition of the rest of the bus. What if it also had some major mechanical problem I wasn’t aware of? The last thing I wanted was to spend heaps of money fixing up the body only to find out that it also needed costly mechanical repairs.

The bus had passed it’s Certificate of Inspection (the annual inspection all heavy vehicles in Queensland must have) only two months ago, and we had driven it almost 300km home the day I bought it without any issues, so it seemed that at least the basics were OK. But after discovering all the hidden rust, I was feeling much less confident, and worried about what other hidden problems might reveal themselves.

Fortunately, the workshop of one of the most highly-recommended heavy vehicle mechanics in town is just a few minutes down the road from me! So I booked the bus in for a thorough inspection. 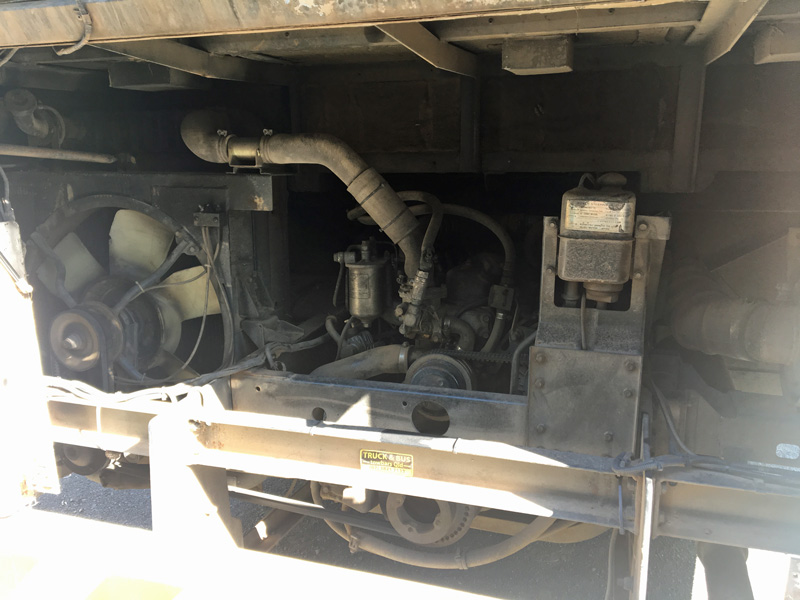 I have to admit that I was dreading the report from the mechanic, fully expecting him to find something major wrong with the engine or maybe something in the chassis I had overlooked.

But it was good news!

He reported that the bus is actually in very good mechanical condition, as is the chassis. There were only a few minor things that required fixing like a couple of hoses that were worn, and some minor adjustments to the front brakes. He even commented that it was the sort of bus he would choose if he was going to convert one himself!

I was so relieved!

At least I made a good purchase in that respect!

So I have decided to stick with the bus I have. It is a huge bummer having to spend a lot more money than I was expecting to fix the rust, but at least it is fixable, and when it is done, I should have a very solid little bus as the foundation for my future home.

The decision now is how to go about doing the repairs?

I could learn to weld and get some help from folks who have done their own rust repairs and try to DIY, but I really feel like that is a bit out of my depth. If it was just some shelves I was welding up then fine, but this is essentially the structural frame and outer walls of my home, and I want to make sure it is done right from the beginning. I don’t want to spend the next 10 years constantly patching up leaks because I couldn’t do a perfect job at the start. I think this is one part of the build that needs to be done by professionals. Of course, that will cost money. Big money I suspect. Maybe it will be more than I can afford and I’ll have to try DIY. I don’t know. But that is the next step – to speak with bus repairers and get some quotes.