There hasn’t been a lot of visible progress on the bus conversion to share in the last couple of months. But there has been a bit going on behind the scenes.

It’s actually been quite a stressful time.

We had the first bit of decent rain since I got the bus back from the repairer and to my despair, the bus had many more leaks than it had previously, and most of the new ones were coming through the poorly sealed gaps between the panels on the sides of the bus. I was really upset by this given that I had spent thousands of dollars on the work and had been assured that the bus would be watertight. 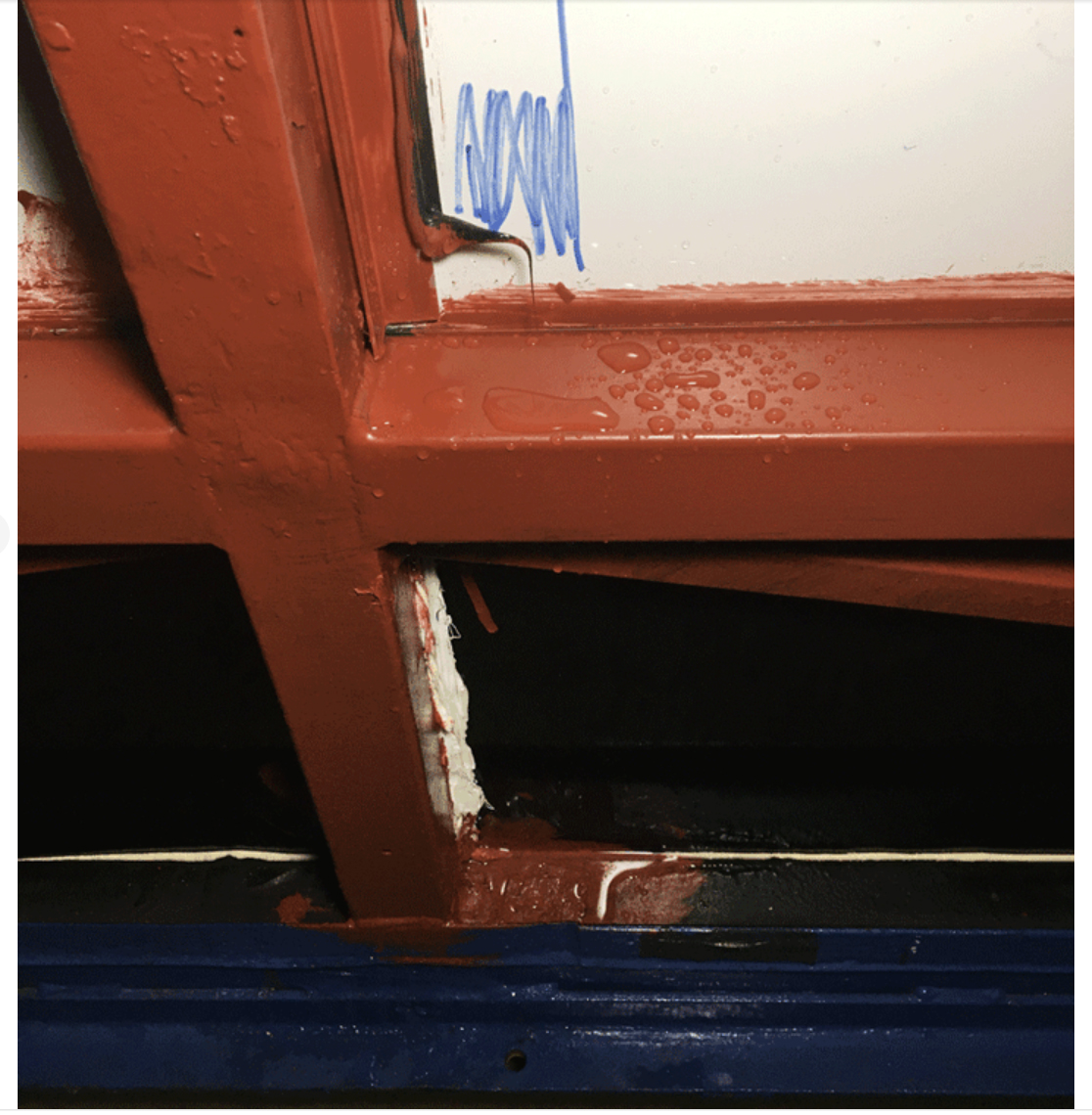 I became even more distressed when I sought advice from other folks about how to fix the issue, and was told by almost everyone I spoke to, (including a professional bus repairer) that the panels would never be able to be properly sealed while the joins were unsupported and that I would need to remove the panels and redo them to properly align with the studs in frame before then sealing the joins. The bus repairer quoted me $2000-$3000 to do this, assuming he could get the panels off without damaging them and re-use them. The cost would be greater if I had to purchase new panels.

The fact is, I just do not have enough money left to pay someone else to redo this work, and I do not have any confidence in the workmanship of the original repairer, so do not want him doing any further work on the bus. I did speak with the ACCC and the Office of Fair Trading QLD, who attempted mediation, but it was clear that I would have to take the repairer to court if I wanted to proceed with attempts to get some of my money refunded.

At the same time as this was going on, I was diagnosed with another melanoma (my second this year) and I was also quite physically unwell, with repeated bouts of epigastric pain. Investigations for a cause of this were all normal, and in hindsight, I think it was largely due to stress.

I had resolved to try and remove the panels myself and redo them, given the advice I had received about that. I was dreading this as I knew it would be a massive job and not easy to do. I also knew it would cost me more money. However, a couple of guys in the bus group I am in on Facebook, both of whom are very experienced with heavy vehicles and have built their own motorhomes too, reassured me that although not an ideal solution, I should be able to fix the leaks by building additional reinforcement behind the panel joins and sealing the gaps better. One of the guys even came out and looked at the bus in person and offered advice. He was confident that it could be fixed without having to totally redo the whole job.

I don’t know if I will ever be 100% confident with these panels, but I certainly am keen to avoid redoing them if at all possible.

So my plan now is to follow their advice and hopefully I can get my bus leak free.

I decided it was not worth the time, or the extra stress that would certainly be involved in trying to take the repairer to court. (and no guarantee I would win the case anyway).

With another cancer diagnosis reminding me of how short life can be, I really now just want to move on and focus on building my bus and hitting the road.

So, with everything that was going on, I’d started to feel quite overwhelmed, especially as the more I started to think about the actual build, the more I realised that there was a lot more planning required. Certain things needed to be done (or at least decided upon) before others. And I kept thinking of more little jobs to do.

I decided to take a step back and look at the whole bus project, and get a plan for how to proceed. I spent half a day doing a brain dump, writing down on post-it notes every job I could think of that needed to be done. I then placed them all on a big whiteboard. The benefit of using the post-it notes was that I could move them around based on the order they needed to be completed. 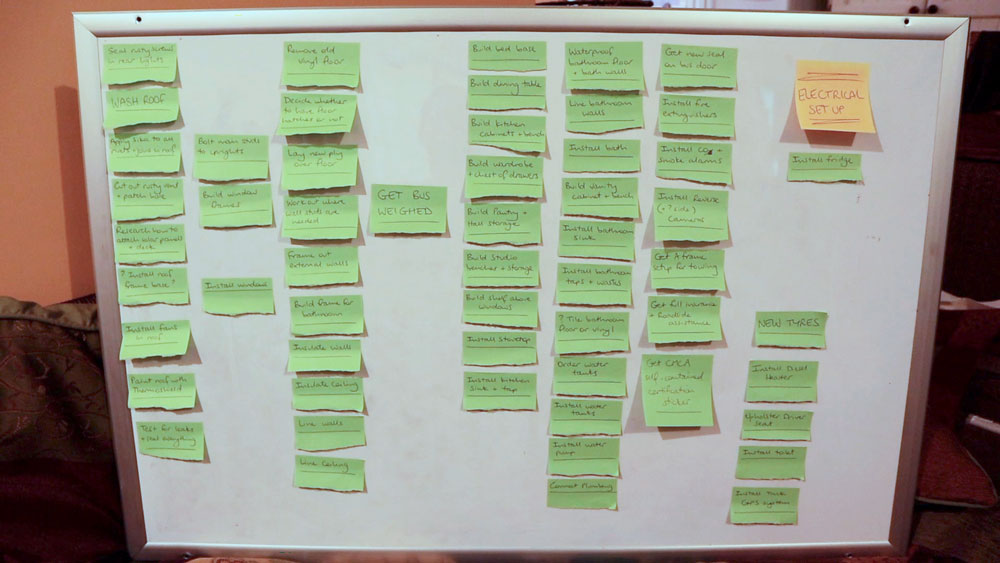 The result was that I can now see at a glance the main things I need to do to get the bus finished. Not only does this make it much easier to plan each task, but it takes away a lot of that overwhelm feeling, because I don’t feel like I have to keep it all in my head now. I can take notes down as things are done and move them around as decisions are made and things change.

I highly recommend this method to anyone faced with a big project like this!

One of the positive things to happen this past month was that I decided to re-design the bathroom for my bus.

I had originally planned to have a walk through bathroom with shower on one side and toilet on the other. I’d planned to get a fully-enclosed fibreglass shower module, but the more I though about it, the more I realised it wouldn’t be that easy to install, as I’d have to cut a fair bit off the top of it to fit the curve of the roof and I was worried that it might look scrappy and be hard to neatly seal afterwards. I also started thinking (probably because I’d been feeling so stressed!) about how nice it is to be able to soak in a bathtub occasionally, and how much I missed living in a house with a bath. I started to think, why don’t I have a bath in the bus? I mean, this is my future home that I am building, why should I not have some little luxuries included?

At first a bathtub in the bus seemed a crazy idea. I wouldn’t have access to a lot of water unless I was parked up at a caravan park perhaps, so wouldn’t actually be able to have a bath that often. But the more I thought about it, the less crazy it seemed. Especially when I discovered that I could get a bath for less than $150 (compared to the $800 shower module!). And being able to use a shower curtain all the way around would also mean less need for waterproofing of surrounding walls.

I also had an issue with the positioning of my guillotine in the studio. I realised that in order for the handle to fully extend (which is necessary for the safety latch to engage) the guillotine would need to be in the centre of the bus where the roof was high enough. This wasn’t possible with the bathroom walkway into the studio being in the centre.

So I ended up redesigning the bathroom to be a single room on one side of the bus with the hallway up the other side. AND I managed to create space for the bathtub as well!

I am so excited to be having a house with a bath again! I know I may not get to use it often, but it will be there if the opportunity does arise, and when it’s not being used as a bath or shower, it will be a fantastic place to hang my laundry out of the weather!